Evgenia Kanaeva surprised everybody again (and it could not have been otherwise!) and become a Double Olympic Champion — first in Rhythmic Gymnastics history of Individuals . Probably, all the rhythmic gymnasts and coaches of the Earth have once asked themselves: Oh, how. HOW does she do it?»

We, ordinary journalists, also asked the same question silently — in front of the screens during the competitions, and aloud — during and interview with Evgenia. And for the umpteenth time we have convinced that there is not the magic secret of the victory here, excluding fantastic hard work, insistence and drop of luck.

After the Olympic Games in Beijing in 2008 EvgeniaKanaeva won all the prestige competitions with masterly skill. 17 medals of the World Cup — it is something! In the age of 21! She was the first in many competitions: the first rhythmic gymnast who got 30 scores of 30 (Grand Prix in Rhythmic Gymnastics, Brno, Czech Republic, 2011), now — Double Olympic Champion in Rhythmic Gymnastics. Do you think it’s the limit? No. Evgenia relates to her performances critically: «It is difficult for me to evaluate. I cannot see myself. But when I watch the videos I like by no means all. There are mistakes. Probably, this is the very red flag that says that I should work harder. The sky is the limit. I always need to try something new. Everybody is training, preparing, doing their best».

London Olympiad has become a real ordeal for EvgeniaKanaeva, comparing to the games of 2008, when nobody took a  old girl as «gold earner». Now she is number 1 in Team Russia, main hope for the gold medal. What the heck! Everybody was absolutely certain even before the Games that Evgenia will get the gold medal. And Evgenia realized this burden of responsibility. She couldn’t sleep in London and understood that she could not let all the hoped down. 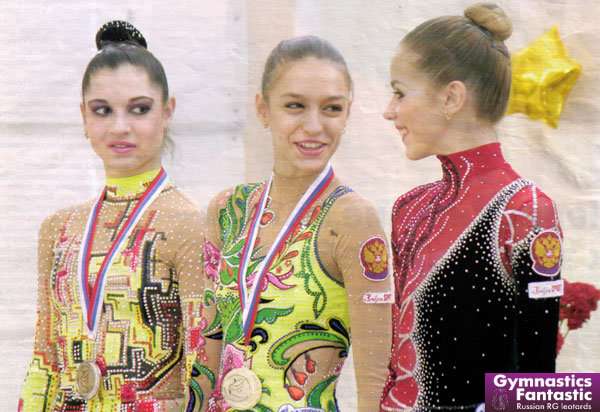 — The leaders are taken in a different way, — Evgenia explains. — The leaders mustn’t make mistakes. On the one hand, the judges is also the audience, who watches the performance and evaluate with pleasure. On the other hand, probably, they are intrigued — will I make a mistake?…

And Evgenia met with a slight mishap on the first day of Hoop Qualification. She loses the hoop twice during the exercise. And if the first mistake was not so serious, the second one couldn’t be turned the blind eye. Bratty hoop ran away from Evgenia overtly. This apparatus loss surprised everybody — audience, coaches, judges and even Evgenia herself (it was noticed by the expression of her face). EvgeniaKanaeva did not catch the hoop, and the second place on the first day of London Olympiad Qualificationwasthe result. The first was Russian gymnast DariaDmitrieva, number 2 of Team Russia. Daria rocked the floor so to speak, Evgeniamighthave decided to save the energy for the final. People worried in social networks and forums: «Evgenia is not fit?». Vera Schtelbaums, personal couch of Evgenia, added fuel to the fire:

And they did! Complexity of the Kanaeva’s program, technique and artistic impression — the whole world couldn’t resist the Siberian gymnast. London Olympic Games is the best confirmation.

After the Olympiad the journalists asked Evgenia in chorus if she was going to perform at the next summer Rio de Janeiro Olympic Games in 2016. But EvgeniaKanaeva is used to live for the day and take short views.

Kristina Pogranichnaya is one of the most promising Ukrainian gymnast!